Like most adults in the United States, I’ve tried it at some point here or there. it didn’t really become a focus here for me until my 18yr old middle son was shot and killed in downtown Anchorage. with what the officer called a pocket lint of cannabis. he and some friends were trying to split an eighth. and you know with kids, someone probably wanted their share, but someone tried to cheat them out of a gram. my son asked the young man to make it correct. But the young man shot my son dead without even taking the gun out of his pocket, rather than give him the amount they had paid him for.

after the experience of losing my son, I became a medical cannabis patient just to be able to keep 1 foot in front of the other.

In 2015
is when the fight for legalization got hot and heavy and they were using the excuse keeping it illegal was about keeping the children safe. Well, I had to put on my big girl panties and stepped out into the public realm and let all the parents know that this was false. That the status was doing anything but keeping the children safe. the cannabis industry here in Alaska was deeply rooted and wasn’t going to go away. So, you either need it to take control of it or recognize that the current path was not going to achieve every parent desired outcome of keeping the kids safe as possible. The only way to do that was to acknowledge the industry, legalize it.

After speaking out at several cities and state meetings the vote passed and it became legal here in Alaska. I was overjoyed to think that people were suffering and in need of cannabis such as people in hospice with cancer with different types of seizures can now get what they needed. It was a wonderful day.

I was the first person to throw a legalize cannabis party. The local paper came out and did a little story on It, Alaska green cross celebrates legalization day. most of the people with licenses today attended the party. They were amazed how calm the party was. The neighbors around the vaca rental where we had the party expected some outrage goings-on I guess. The next day they sent us messages saying how they didn’t even know that there was that large a party and group of people coming and going next-door. That’s because stoners don’t get out of control like people who are drinking alcohol.
Like everyone else, I look forward to helping the helping the state and then municipality draft reasonable laws expecting and looking forward to being included along with my fellow advocates.

I came upon this condo space here at the King's Row Shopping center with my realtor that I have been working with for months. Making sure that everyone understood and knew that I was looking for space for a Legal Retail cannabis shop. I gave the condo association a copy of my business license and my business plan. And that I intended to apply for a license and do specifically a legal cannabis business there in the shop. they approved me moving in and approve me putting in my very expensive security bars they approved working on the designs with me for my sign. But they were going behind my back telling the state licensing not to give me a license. Because they didn’t want me there. They went behind my back and change the rules and threatened me and made me agree to backdate stuff that was just ridiculous.

Then when I was going for my license for the state they did everything from losing supposedly parts of my license. Not giving everything turned into them to the control board.

They then went to accusing my family Members that have worked for the state for over a decade of not being a resident. They did numerous things to try and stall our licenses. Multiple directors signed their signatures to statements that weren’t even true. During the appeal process when I was representing myself, because I couldn’t afford an attorney. They came right out and said some of the stuff they did to me was strictly for the point period of Public publicity as they said.

They made sure that I knew that Alaska marijuana control board is not to beholding to any law of the land. And that in this state I don’t have any civil rights.

They said when they denied my license, the reason why it was denied was my attorney was a friend of the of the attorney of the condo association. They didn’t want it to be even though they didn’t have a legal right to do that.

They told me I had 90 days to finish up my license paperwork and turn in the items that they wanted and in such a manner that they needed them. When they saw we were getting too close to get it done so they denied us the 90 days that we had under the administrative law. In the end, the only thing that they really said was a problem was the way we depicted our glass display cases, even though the cases were never going to have cannabis in them. But they denied us and took away the 90 days they said they were going to give us because they wanted to. They weren’t required to do what they said they were going to do and it doesn’t matter what rights I’m supposed to have. They could do what they want.

My family and I have been landlords, nurses, hospice homeowners. My sons are social workers and hospice care providers. Our friends are RN’s in our company. They have been professional providing care for Alaska residence for over 20-25 years.

It never occurred to me that my family and I would be painted with slander even having my veteran status called into question.

Once I got this location everyone knew it’s a very very lucrative location because I’m right across the street from the world largest Costco’s. Over of over 55,000 people, a day see my store. They are putting a brand-new Dave and busters half a block away.

It became an all-out cut campaign. They can’t see an African-American female succeed in the cannabis industry in this state. They had everything from attorneys that wrote up illegal business plans that weren’t even legal in the state of Alaska. They had numbers and terminology and references that were from the state of California. To them telling me that their friends of my lawyer and he’s friends with the lawyer of the head of the condo association. And trying to get me to do what they wanted me to do.

I have everything on tape. The entire meeting where you can hear how they treated me and how others were given caveats towards getting their license to get things much greater dealt with compared to the little complaint they had with mine. That wasn’t a legal reason to deny it.
You can hear them say during the appeal process that they didn’t care. You can hear directors on the stands perjure themselves. But I’m still here

This user hasn't made any contributions yet. 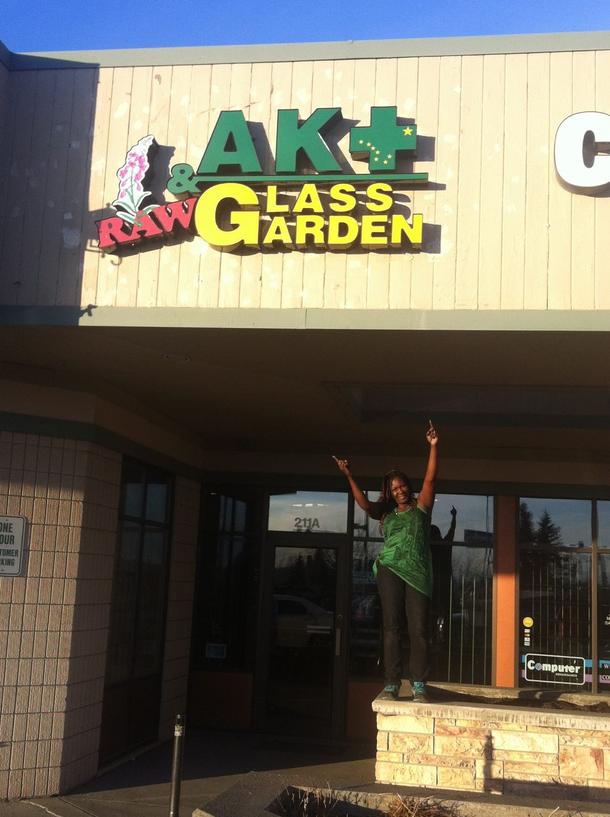 Defence of our right to do business in Alaska

by Adele Tara
Why did AMCO & MCB not give a plan created around safety 1st, that Local government found very positive for the community a chance?
Donate Now