Animals
80 %
This campaign did not reach it's goal 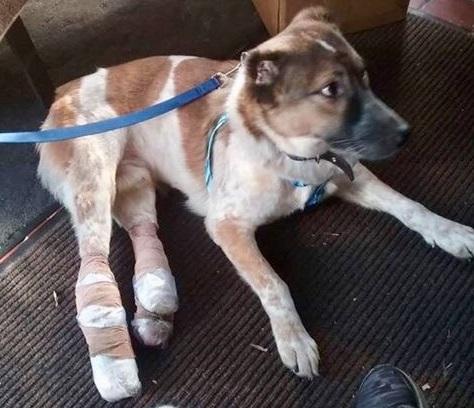 Zachary’s surgery went well. He is at the clinic, coming out of anesthesia. His doctor was able to save 55% of his boned which guarantees an ability to get him prosthetic legs in a future. Thank you for all you support and prayers! Please continue share a link to Zachary’s campaign on your social media.

This dog Zachary knows what happiness is. At one point he was handsome and healthy Alabai mix puppy and had a master who loved him.

He was strong, loyal, playful and affectionate companion.

One day, this one the most important person Zachary loved, died, and as a result he found himself thrown onto the streets. He did not know what to think and where to go. He just went on a long journey to find his human.

When he became exhausted, weak, and hungry, he went to humans to seek help. He believed that people could help him. Unfortunately, he met and trusted wrong people.

He silently suffered terrible beatings and pain while these sadists were breaking his legs and spine..........
As much as Zachary wished to cross Rainbow bridge that day to end his sufferings and meet his master, it wasn’t his day to die.

He was found by a group of volunteers from shelter "Ushastyaya Nanny" Rostov, Russia.
Regardless of unspeakable abuse, Zachary didn’t lose complete trust in human kindness and licked the hands of his saviors.

Sadists broke Zachary’s spine, cut off an ear and one of his paws.
He was taken to a clinic for emergency surgery. Sometime after the surgery, against all odds, Zachary started walking on his twisted mutilated legs.

Zachary’s story was shared on Facebook and Instagram and touched hearts of many. He found a lot of supporters around the globe who wrote a lot of positive comments and sent donations to help to pay for his surgery, braces, and rehab.

One special family Tatyana Kalugina and Vladimir Izgorodin, immigrants from Russia, who now live in Cleveland Ohio, helped Zachary while he was in recovery for almost 2 years. Finally they decided to adopt him.

Zachary arrived to US on November 20 of 2017 and warmed up to his new family almost immediately.
Unfortunately coming to US wasn’t the end of Zachary’s ordeal.  Doctors here in US recommended amputation of Zachary’s hind legs. Zachary is a fighter and loves life. Ignoring all his pain, he tries to walk resulting in soft tissue damage causing daily bleeding and infection.
There is astronomical cost associated with Zachary’s surgery, recovery, rehab, getting him a wheelchair and prosthetic legs in the future.

Please help Tatyana and Vladimir with a donation to help offset the unexpected estimated cost of $3,800 for surgery and recovery expenses.
Every dollar donated to Zachary’s campaign counts and help Zachary’s family to pay his medical bill.

People often ask me why I help animals as supposed to struggling children. I don’t have an answer to this question. I believe that every living creature in need has an equal chance on this planet. Some of us feel right to help children; others to help animals. Look into Zachary’s eyes and even if you don’t have a dollar to spare, please share a link to his campaign. Giving him a chance to find more supporters would be equally great help.
Thank you all.

Thirst For Life. Video Of Zachary on a walk.