A campaign by John Vajra Utah

Community
19 %
This campaign will keep all money contributed.
Closed for contributions

A campaign by John Vajra Utah 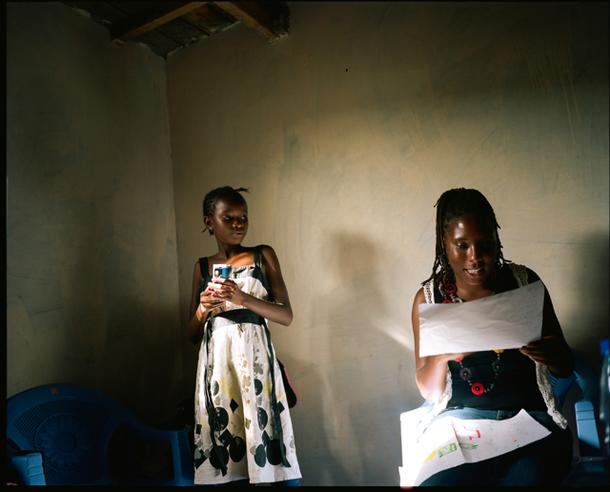 What would you do if you were in Tanzania, doing humanitarian work, when your whole savings and social support system suddenly crumbles?

If you had plenty of resources, it would be easy to adapt - but then, it wouldn't count as your support system crumbling.

Daniela Groza is an artist, and she supports herself by working as an UBER driver. And her extra funds, well, she uses those to help others, and mix social work with documentary photography in order to bring more justice and equality into the world.

But she just got scammed - BIG TIME.

And now you get to help Daniela  get her awesome socially kind and life back on creative track and she'll return the gift with some amazing photography that will enrich any space you display it in, and give you a beautiful, compassionate story to tell.

Why hear just me saying this, let me quote someone else as well:

'I've been following this wonderful human a few years now, and she has to be one of the most interesting, artistic, genuine, and talented beings I've ever had the chance to encounter. She practices what she believes in, which is simply, kindness, and it radiates in her work.

She has supported and helped so many projects just because she cared and she believed in being kind.

Now she needs help in order to come back from Tanzania and get back on her feet.' 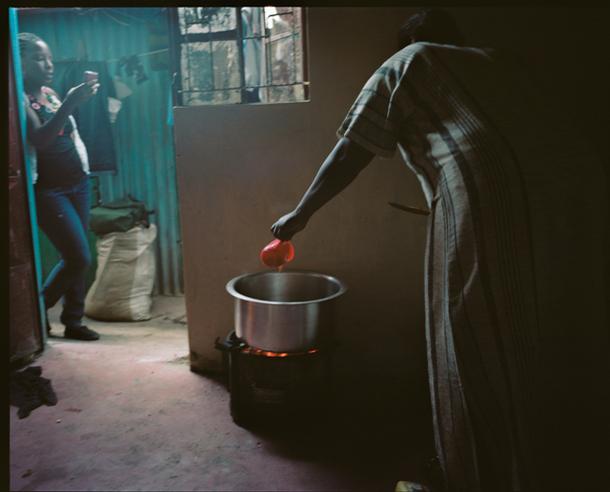 Daniela Groza is stuck in Tanzania. Which is a good thing, because that's where she went to do pro-bono documentary photography for the K-robs Social Enterprise foundation - a non profit consultancy organization that partners with local NGOs to help children gain access to quality education.

It's also a bad thing, because she got scammed by someone back in the U.S. - which threatens her livelihood, her stability, and possibly even her survival for the coming months.

She is someone I didn't know until today, we are Facebook friends and have many common acquaintances, but have never actually talked. I've seen photos of her and her girlfriend in my feed sometimes, and I've seen her art, and now I jumped to help when I heard her story - because she is truly kind and because her photography is beautiful, but MOST OF ALL because nobody should have their livelihood taken away from then when they are off helping others, working to better the lives of children living in impoverished conditions. 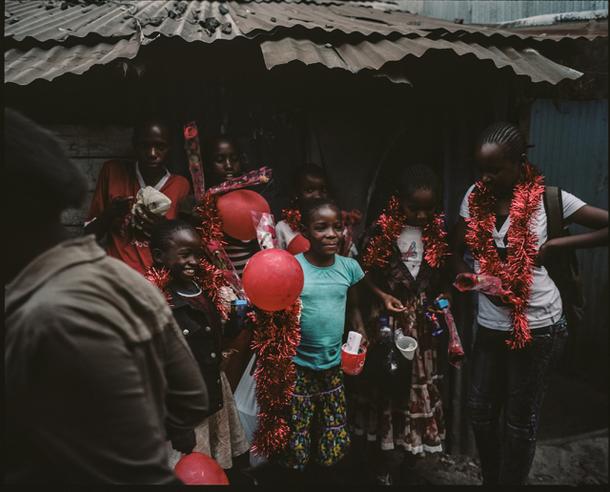 One of her sites is www.bekindforreal.org – and right now we should be working to be kind towards her, while she is struggling without good internet access – sites not loading, her phone not charged – struggling to restore justice and her livelihood and her ability to create art and make this world a better place.

You can read her Tanzania diary here and you can see her photography here.

The K-robs foundation commissioned Daniela's work for three weeks during September and October, and off she went to Tanzania to photograph young students and their socio-economic struggles in attending an all-girls school.

You can see her funding page for this project here.

Then September 26th, the check she had relied on to buy the equipment and supplies for the trip bounced. 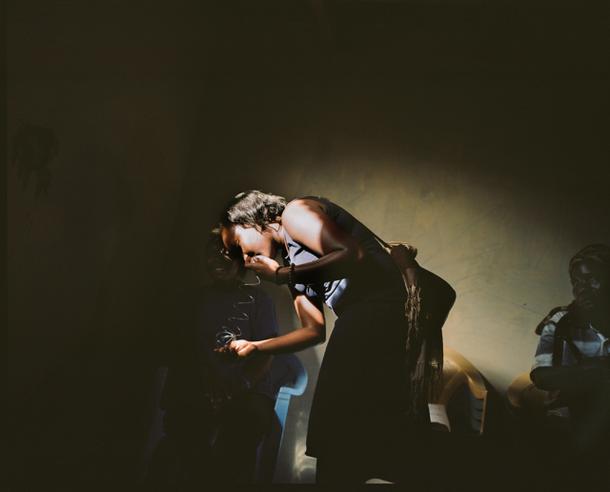 Back in Brooklyn, Hossam Hussein, from American Transit Insurance - the insurance broker she had been sent to by her car dealer -  had failed to pay insurance for her car during the three months of summer.

In Early September, she got pulled over by police while driving for UBER, and got a DMV report for driving without insurance. Which means the license plates had to be changed - special taxi plates, with special insurance, the car has to be inspected and it takes much longer than regular insurance for a regular car.

Her insurance broker said he has people at the DMV who will help with new registration and license plates, so she left the car with him. Two weeks before leaving for Tanzania, nothing positive was happening towards the new license plates, so she confronted him, and because she has bank statement to prove that she paid during the summer, he gave her a check for $900 to cover the insurance he failed to pay, and a promise to give her more, and get the plates finally done.

This is a photo of the actual check: 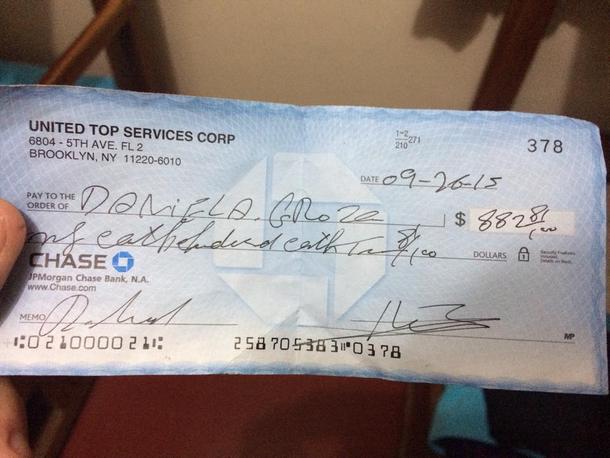 Daniela had also given him $1100 downpayment and other fees, to cover Jan/Feb/March of 2016, because he claimed the standard year had already started.

She paid a total of about $2200 directly to him, and the rest of the fees to register the car initially amounted to $4000, which the lost due to the plates being revoked.

Then not being able to work during September due to her insurance money being appropriated by her broker amounts to approximately $4000 wages lost in September. 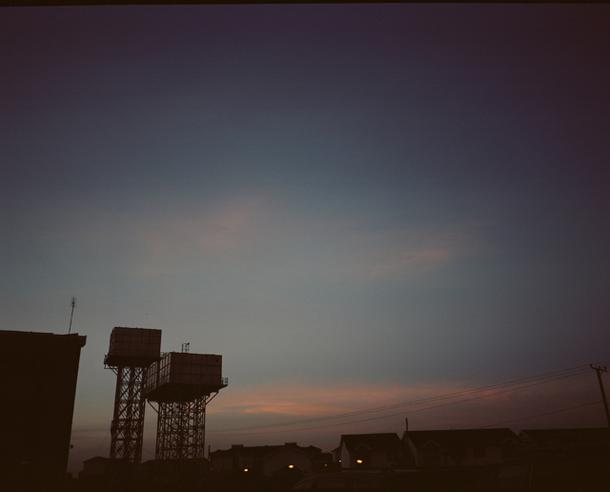 But using that check for $900 she still felt safe enough to go ahead and buy everything she needed for her work in Tanzania. This was two weeks ago - her insurance broker had advised her to wait a bit until she deposits it, which she did.

Then, the check bounced.

She tried emailing and calling, which is difficult to do from Tanzania right now, there's poor connection and it's election time, with power going out all the time because the old president is trying to sabotage the proceedings. A journalist friend from the U.S. has been calling the broker daily, but with no results.

She's not even sure where the car is, the car dealer said he'll get it back, but she hasn't heard back about it yet. She has the title for the car, but she's worried for basic survival - she has literally no safety net given the situation, which more or less mirrors the situation of the girls she went to Tanzania to work with.

Her girlfriend will cover the cost of the ticket to the U.S. and she can stay with her for a bit, but she needs a way to raise money to re-register the car and get it up and running. She also needs to support herself for the time it will take to deal with all the paperwork. She can't work UBER for a while, can't pay bills, and that was the job she was using in order to support her photography and social work in the first place. 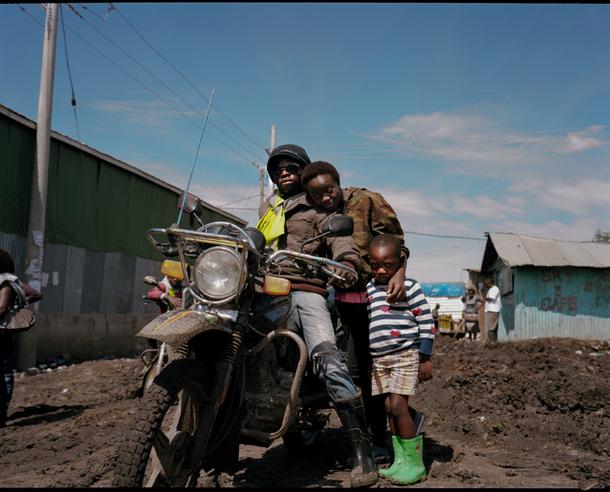 It takes about a month to get everything together to restart her job, and the paperwork is expensive.

Ideally, she would need to raise $5000 to get everything up and running.

And right now, she is stuck in a place she loves, but that is far away from the source of her troubles and income.

She's trying to do a good thing - a wonderfully beautiful thing that mixes art and social liberation, that touches the destinies of many girls who are struggling to find their way in this world, and she shouldn't be going through all this, having her whole social support system and her ability to support others - all taken away for nothing. For a scam. 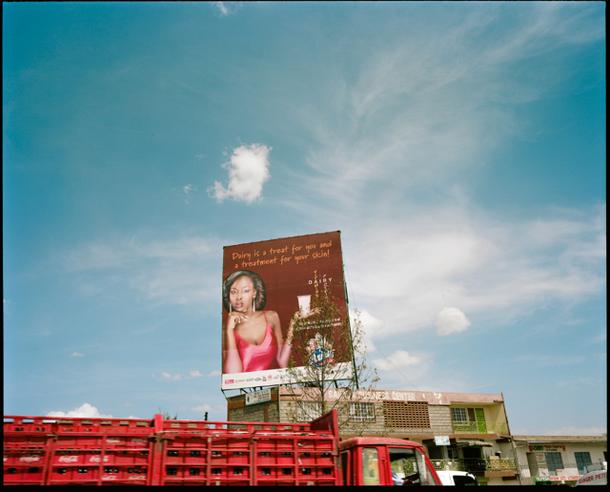 Her photographs are taken on film - they are 6x7 medium format photographs that have been scanned and digitized, so they are very high quality.

She's sold them in her exhibits in New York, has been noticed by the Magnum Foundation, and her photographs are currently listed at NYU, at $600 unframed.

Look at the photos from her site, pick what you like - there's a lot of very varied projects - and Daniela will send you the high quality digital file. Then you can print it yourself. It's the easiest, most painless way, in a digital world.

And you pay what you want. Because she needs your help, and all help is welcome. It's an exchange of gifts, the photographs have already been taken, her help in Tanzania has already been delivered, now she needs our help to get her life back in working order. 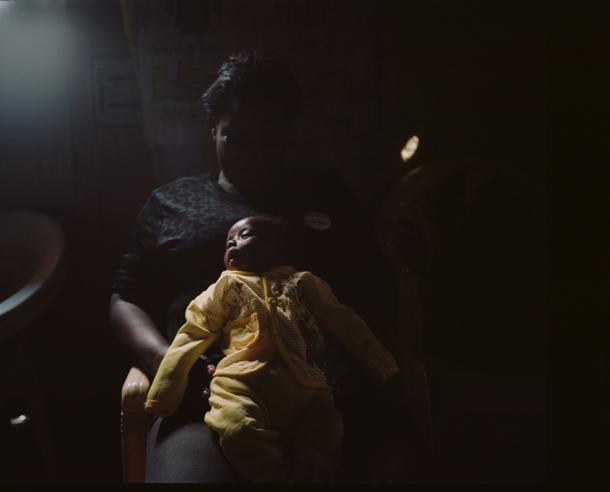