Darkling as an Audiobook

Books
126 %
This campaign will keep all money contributed.
Closed for contributions

My debut novel, Darkling, has found its way into the hearts of hundreds from the young adults it was written for to the surprising outpouring of support and enthusiasm from readers who "took a chance" on my independently published tale. Written under my pen name, K.M. Rice, Darkling is my suspenseful debut novel about a young woman's sacrifice to save her village and the unexpected strength that comes from first love.

With your help, Darkling can now become a fully immersive experience by being recorded as an audiobook! The incredibly talented voice artist Gail Shalan is ready to bring Willow and the story to life.

This is your chance to not only be a part of this exciting project and pre-order the audiobook, but to get your hands on some exclusives such as artwork from Lindsey Crummett who is one of the many talents from the Academy Award-winning design team at Weta Workshop (Lord of the Rings, The Hobbit, Avatar), and an exclusive short story extending Darkling by eighteen pages, called “Willow’s Dream.”

So please, grab a cup of tea and have a look around at the rewards. Something might catch your eye!

UPDATE FOR INTERNATIONAL BACKERS! While I cannot edit the listings of the rewards, all are now available for shipping overseas if you are willing to pay the extra shipping costs ($22.50 for the book, $13.50 for the poster). Just shoot us a message here, on my author page, or at kmriceauthor@gmail.com to inquire!

All copies of my books are personalized/autographed upon request at no extra cost. :)

Have a look at the stretch goal rewards now being released, including an audiobook of K.M. Rice's novella The Wild Frontier (Historical Fiction) and a pre-order of Eurielle's recording of "Midsummer's Song" from Darkling!

Please be sure to email KMRiceAuthor@gmail.com with your shipping address. If you receive a red rose with your order, you have won a free download of the song! All additional funds will go straight into Darkling's companion novel, The Watcher, and the rest of K.M. Rice's upcoming novels.

Gail works from her home studio in Western Massachusetts. You can find out more about her current film, stage, and audio projects on her website- www.gailshalan.com and find out how to download any of her Audiobooks for FREE on the "Listens" page of the site.

Lindsey has always had many passions in life. From the time she was little, her imagination was captured by nature, animals, biology, evolution, storytelling, film, and creating anything exciting with her own two hands. She made a determination from the time she was eleven and first saw Jurassic Park in the theatre; one day she would help bring creatures to life on screen.

In 2007 she began work at Weta Workshop, a long-time dream of hers since she had seen The Lord of the Rings. In her time at Weta she has worked in Props Making, Sculpting and Concept Design. Her credits include such films as Avatar, District 9, The Hobbit Trilogy, and Power Rangers to name a few. She considers herself very fortunate to have been able to experience many aspects of pre-production at Weta Workshop, as well as Collectible Sculpting for those same films.

Making time for her Freelance career as well, Lindsey's passion lies in collaborating to create innovative and exciting artwork for Film, Gaming, Toys, and Publishing. Check out Lindsey’s work here: 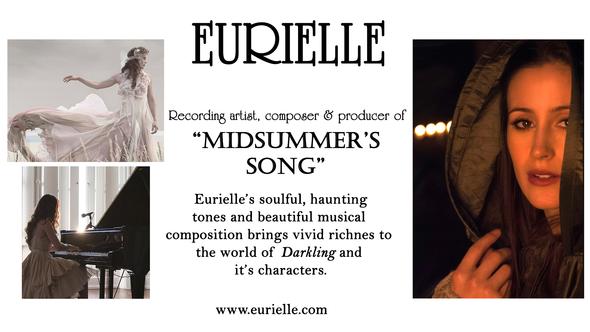 From an idyllic, leafy Yorkshire upbringing and a lifetime dedicated to classical training comes Eurielle.

Her natural ability to connect with her voice, coupled with a pure simplicity of tone has subsequently resulted in strong demand for her vocals for high profile film, TV and video game soundtracks from pre-eminent composers including Emmy Award winning John Lunn, Harry Potter composer Nicholas Hooper, and two time Ivor Novello Award winning Benjamin Wallfisch, seeing Eurielle record for the likes of Downton Abbey, Disney, the BBC, the Rio Paralympics 2016, Kaleidoscope Pictures, and 20th Century Fox throughout the course of this year alone.

To date, Eurielle has released an EP – ‘The Incarnation’ (2013), two singles; ‘Gold’ (2013), and ‘Carry Me’ (2014), and in December 2015, her Debut Album – ‘Arcadia’, as well as a selection of official videos, all of which were shot by award winning cinematographer Nick Cooke (Inter Film Festival Berlin, Cannes Corporate and TV Awards, amongst others). Her work has already earned her the recognition and endorsement of BBC Introducing with her song ‘Raindrops’ being selected several times for airplay in both Essex and Suffolk, and online she has attracted a substantial fan base on YouTube with millions of views of her recordings.

K.M. Rice is a national award-winning screenwriter and author who has worked for both Magic Leap and Weta Workshop, the latter being responsible for such cinematic epics as The Lord of the Rings and The Hobbit. Her first novel, Darkling, is a young adult fantastical thriller.

Her novella The Wild Frontier is an ode to the American spirit of adventure and seeks to awaken the wildish nature in all of us.

As the producer of the webseries Happy Hobbit, she was also a contributor to J.W. Braun's book Middle-earth Madness.

Her work has been featured in the literary journal Passing Through: Stories and Art About the Road Less Traveled.

In the past, she has had her work published in the literary journal Reed Magazine and was also the focus of a feature article in the August 2009 issue of Script Magazine. Her most recent release, The Country Beyond the Forests, is a short story and selected poetry collection showcasing a range of genres and styles.

The Watcher, a companion piece to Darkling, is due out this summer.

When not working on her novels or hiking in the woods, she can be found enjoying the company of the many animals on her family ranch in the Santa Cruz Mountains.

Her books can be found online at Amazon and Barnes & Noble, and in-store at Bookshop Santa Cruz and BaronHook Boutique.

Where Will the Money Go?

All funds raised will go towards the recording and editing of the audiobook, and the printing and shipping of both the limited edition copies of Darkling and Lindsey's art print.

Since we reached our goal on May 27th, 2017, we are now releasing our stretch goal rewards! Any extra funds raised will go straight into the production of Darkling's companion novel, The Watcher, and the rest of K.M. Rice's upcoming novels.